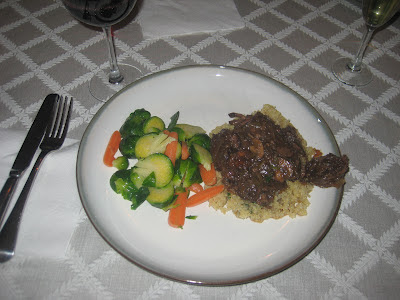 Another simple but good dinner.  Pot Roast with Hoisin, Red Wine,
Leeks, and Mushrooms.  Plopped on a bed of default Quinoa, and
Brussels Sprouts with Baby Carrots on the side.  Much Spanish wine
and Prosecco accompanied the dinner.  A multi-cultural affair.
Posted by Baydog at 10:13 PM 9 comments: I'm proud to see one of my fellow blogmeisters cooking his heart
out and posting a photo of the dish.  And the fact that he's a
sailblogger makes it even more special.  Salmon with fresh dill,
quinoa (my favorite) with carrots, celery, and sliced almonds, and
sauteed zucchini and yellow squash, with butter and grated
parmesan.  Hey, that looks like my kitchen table!
Posted by Baydog at 8:36 PM No comments: 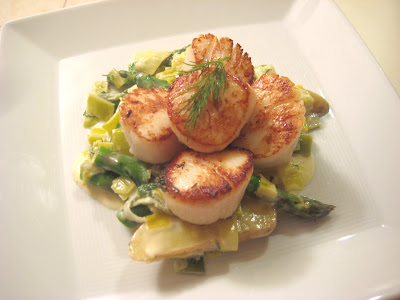 And I cooked some of her absolute most favorite food.  We typically
don't go out for dinner on Valentine's Day.  It stems from my having
to work that night for the past 30+ years.  I swore if I ever was off,
we'd spend the night at home, and I'd spend half the money and make
something twice as good.  Seared sea scallops with asparagus,
leeks, and fingerling potatoes enveloped in cream, dill, and lemon. 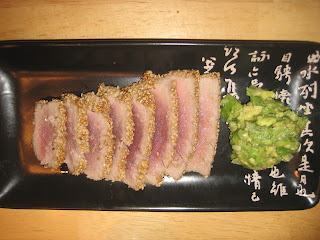 I did some sesame-crusted seared tuna, sliced and served with
wasabi and soy to start.  Oh, and a scoop of Guacamole on the
side.  The tuna could've been a little more rare, but it was super
fresh and tender so no big deal. There's tuna leftover for my
wife's lunch tomorrow, as well as scallops and the vegetable
melange. Co-workers will be craning over to inquire.
Posted by Baydog at 9:20 PM 3 comments: 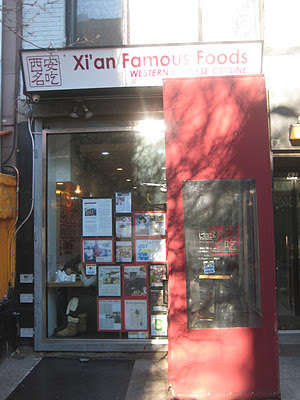 A couple weeks ago I was in Manhattan to pick up a book I
had ordered from St. Mark's Bookstore in the East Village.
Knowing that a mere 2 blocks away was a little noodle shop
I'd seen on several foodie shows, my visit had 2 objectives:
pick up the Joe Beef cookbook, and have this spicy cumin lamb
that has been occupying my thoughts ever since seeing weird
Mo Rocca featuring it on the Cooking Channel. 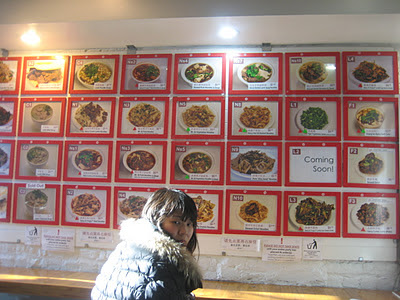 Xian Famous Foods is the place, where among other things,
you can have a salad made of Lamb's face. They had me at
salad of Lamb's face. I like it when the entire menu is in photos
on the wall.  I'd love to know what animal part will make up an
order of L2.  Under the menu were all kinds of 'rules' signage,
about not placing orders until your entire party is present,
not sitting down until your entire party has ordered, no eating
until your entire party has sat down (joke), etc.  There is
seating for 12, with three small square deuces and a
groaning board along the wall for 6 underneath the menu.
At one point, I was the only non-Chinese person
in the place - usually a good sign.  So there was a stretch
where I didn't hear a word of English, and it almost sounded
like the woman behind the counter was reprimanding the other
customers.  When my food was ready, I got up, grabbed my
tray, and sat back down.  These other folks were up and down
at her beckoning, going back and forth with different plates and
utensils, expressionless and not saying a word.  They must just know
the right way to order.  I was happy not to have to get up again. 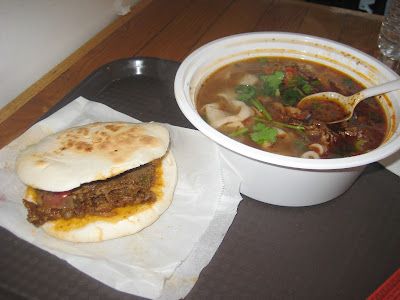 I went with the spicy cumin lamb burger that I'd heard so much
about.  It was everything I imagined:  tender shredded lamb with a
cumin-chile type sauce, served on a soft but crunchy-on-the-outside
bun.  Bourdain loved it and so did I.  The spicy cumin lamb soup
with hand-ripped noodles was good, but could have contained more
meat.  The broth was amazing (I'm a broth fiend), and the spice level
was right on, but the noodles were kind of doughy, like any fresh
pasta I have ever attempted to make.  It was well worth the walk,
however, and I'll go again with lamb treasures soup (yep), and spicy
tingly lamb face salad on my mind.
Posted by Baydog at 12:05 AM 4 comments: