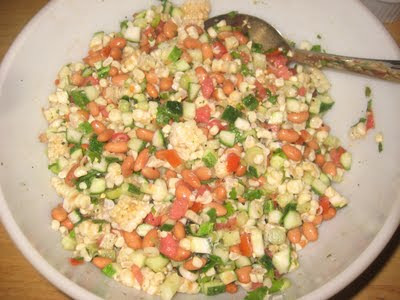 I've finally slowed down on buying corn.  When it first appears
at farmstands in the beginning of July, I can't get enough of it.
Now, once a week will do, and leftover ears are usually cut down
and mixed with diced Kirby cucumbers, tomatoes, scallions,
cilantro, a can of beans (any kind will do - these happen to be pintos),
olive oil, red wine vinegar, salt and pepper, and cumin.  Not too
much cumin, but just enough to notice.  For an hour before dinner,
continue folding the salad every ten minutes or so to keep the
ingredients coated.  Cool, crisp, and refreshing.  When you're
done eating, you'll be going back to the bowl with your fork for
just one more flavor-bursting bite after another.  Until someone
tells you to cut that shit out.
Posted by Baydog at 9:23 PM No comments: 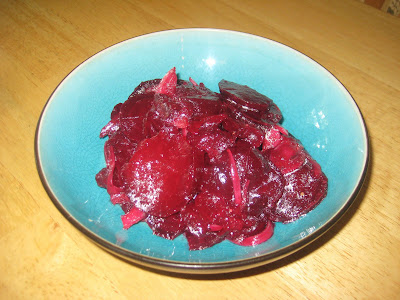 I had been asking for beets at one of my favorite farmstands
for a week or two, and today they got sick of me asking.  The
farmer went out back and pulled 2 bunches for me while I waited.
Within an hour they were trimmed, washed, and roasted in their
skins with olive oil until a knife easily went through them.  Roasting
as opposed to boiling the beets retains all of the juices and the
deep red color and concentrates the flavor of the beet as well.
When cooled, rub off the skin, slice the beets, and mix with a
sliced onion, olive oil, balsamic vinegar, salt and pepper.
Simple. And phenomenally delicious.
Posted by Baydog at 9:06 PM 10 comments:

Check out the veil of smoke escaping from the grill and
then being sucked up over the lid.  Ghostlike, it clings
to the exterior of the dome and then releases at the top.
With the indirect cooking/smoking of the rib-ends and
potatoes complete, more charcoal was added and
soon the marinated flank steak would be grilled.
Of course, Jersey sweet white corn was also served,
and all the while dark & stormies were consumed.

This test rib yelled out to be eaten.  Barely clinging to its
own serving utensil, the meat, cartilage, and fat slowly
receded from the bone, leaving a perfect, tidy mouthful
of smoky heaven.  I'm hungry again just writing this.
Posted by Baydog at 11:42 PM 3 comments: 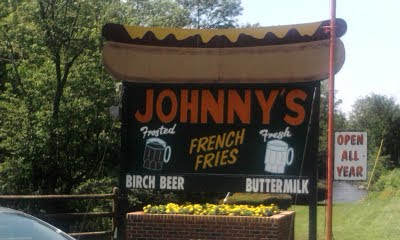 We drove our younger daughter to camp in the Poconos this
morning, travelling north on rt. 31 and then east on 46 on our
way to the Delaware Water Gap.  While passing through Buttzville,
I couldn't help noticing Hot Dog Johnny's, a throwback roadside
mecca of  deep-fried hot dogs and draft birch beer.  Note to self:
Stop there on the way back, at any cost.  Do not eat a single bite of
food between now and the moment you pull into that parking lot
on the way home.  The lot was empty at 8:00 a.m., but surely they'd
be jamming at lunch time.  My intuition proved to be accurate as the
place was abuzz with travelers of all shapes and sizes. 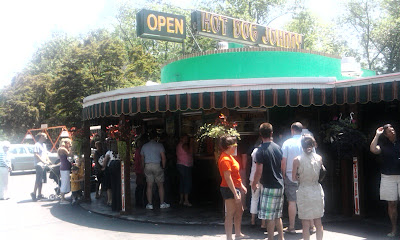 We waited only a couple minutes in line, and when I got to the
window, I realized how customers were served so quickly.  I
naively asked if there was a menu to see, for I had scanned the
walls and found nothing of the sort.  The reply was no.  I then
asked what they had, and in a single breath, the girl behind the
counter said, "hot dogs, fries and soda".  Then give me two hot
dogs with pickles and mustard, fries, and a birch beer.  My order
was taken so quickly, I had forgotten to ask about the buttermilk,
which apparently some people drink cold from a mug with their
dogs and fries.  Next time......Buttermilk? 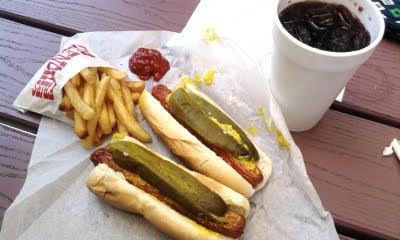 We found a picnic bench out of about a dozen, which on the average,
turns in around ten minutes or so.  The birch beer was deep red and
delicious, the fries were crispy and salty (perfect), and the dogs were
pretty average, truth be told.  A little bit wrinkled from the deep fryer,
they were good, not great.  Didn't matter.  This place smacked of
Americana and to pass by would have surely amounted to treason.
And far be it from us not to be American-like.
Posted by Baydog at 9:15 PM 7 comments: 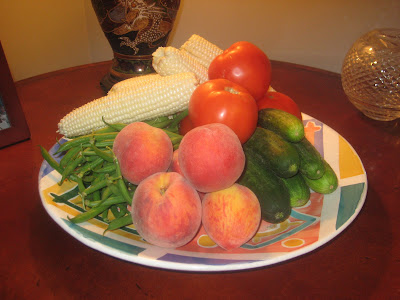 New Jersey farmstands are just about in full swing, with the
world-famous sweet white corn, tomatoes, and yellow peaches
headlining the bill.  The Kirby cukes make great asian cucumber
salad, and the beans are rock hard and dark green, picked this
morning.  I try like hell not to buy vegetables in the grocery store
from July thru September, relying on the bounty of the local stands
instead.  Yeah, you may pay a bit more for certain items, but just
knowing that the stuff is that much fresher makes it all worthwhile.
A close blogging friend put it best: "There's a lot to be said for letting
fruit and veggies ripen in the field instead of a warehouse."  This
produce I consider to be 'artisanal', in that it takes more time to
nurture, to mature, and to bring to market than mass-grown and
harvested crops.  There's a difference in the look, feel, and taste
of these fruits and vegetables.  And they might not always appear
as perfect as their store-bought cousins.  Billy Crystal once said,
"It's not how you look, darling, but how you taste."  Or something
like that.  By the way, this white corn was " the most obscenely
sweet and juicy, kernels pop in your mouth, where did that ear
just go? corn"  I've had in about ten months.  I'll be leaning over
the sink later-on tonight devouring the rest of the leftover ears.
Even if I'm not necessarily hungry. 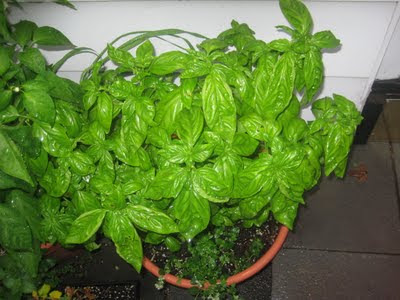 BTW, is anyone else's basil exploding?
Posted by Baydog at 9:14 PM 4 comments: 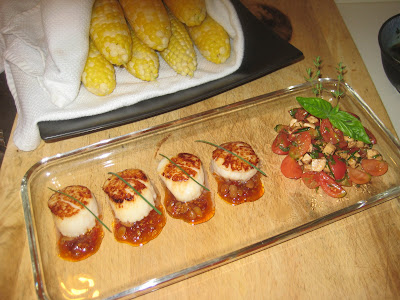 I can without hesitation say:  Summer's here in New Jersey!
For the last week or two, my eyes have been trained to the
roadside for 'Sweet Corn' signs, and this morning my patience
paid off.  We passed a couple of familiar spots before pulling in
to our go-to stand, Krowicki's of New Egypt.  They were selling
bread and butter corn, not my favorite but still good, at $5 a dozen.
The only stand on our normal route that sells a baker's dozen.
Mrs. Krowicki assured me that the B&B is first to mature, and
the sweetest of the bunch.  I disagree.  Their Silver Queen is by
far the most obscenely sweet and juicy, kernels pop in your mouth,
where did that ear just go? corn I've ever had.  I've spoken with
people from Iowa and Indiana, Pennsylvania and Ohio, Maryland
and Long Island, all claiming theirs to be the best of the best.
How do you spell the sound you make with your mouth when
you completely dismiss something someone just says to you?
Atlantic City sea scallops accompanied the corn, with
soybean/chile paste, and cherry tomatoes, mozzarella,
thyme, basil, and chives in a pile to the side.
Oh yeah.  We bought the first of the Jersey peaches this
morning too.  The juice ran down our cheeks all the way
down to the boat.
Posted by Baydog at 9:44 PM 6 comments: