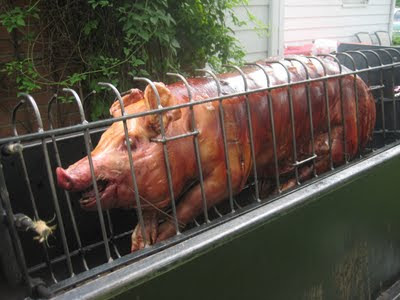 I'd always been intrigued by a pig roast, and when the monumental
occasion of my daughter's High School graduation presented
itself we decided that a whole hog would be a fitting centerpiece
to a day of celebration.  We were right in thinking so.
Two days earlier, I picked the pig up at the butcher's and brought
it home to prepare for the big day.  With a marinade syringe I
injected the larger portions of the pig with an apple cider and
brown sugar brine, which was to moisten as well as flavor
an otherwise fairly mild-tasting meat. I found as the pig roasted
slowly for 9 hours, some of the brine oozed out of the needle
holes and caramelized on the outside of the skin; kind of like
self-basting.  Later in the day when I tapped the keg, the first
few cups of foam that were drawn were ceremoniously
poured over the pig as well, for added flavor of course.
I learned a few things from my first attempt at roasting a whole
hog.  First off, you can't start cooking early enough.  My
pig started turning at 8:30 a.m. They say to allow an hour for
cooking every 10 pounds of pig at 250 degrees.  The final
internal temperature of the pig must be at least 160, especially
in the thicker sections of the roast.  In a charcoal roaster with an
open top, in my opinion, there's no exact science to maintaining
a constant temperature of 250, unless of course I just haven't
figured it out yet.  I used about 140 pounds of charcoal, adding
around 15 pounds to the embers per hour.  In retrospect, the grill
probably could have been hotter over the course of the day, as
the meat was certainly cooked through and moist, but it wasn't
coming off of the bone as easily as I had envisioned it.  Guests
seemed to enjoy it nevertheless, and we will continue to be fed
by this roast for many meals to come. 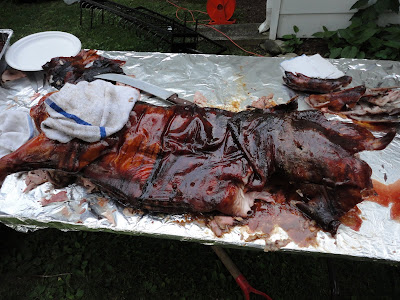 I also didn't foresee this job of serving being so incredibly tricky.
Even after letting the pig rest for over a half hour after removing
it from the rotisserie, the inside was still quite hot, which made
getting a hold of it rather challenging.  Add to that a good amount
of grease (yes, pigs do have a lot of fat) and it's a slippery
hot assignment.  There must be some kind of heat/grease
resistant gloves that I can use next time.  I can see the BBQ
experts reading this right now, doubled over and laughing O L. 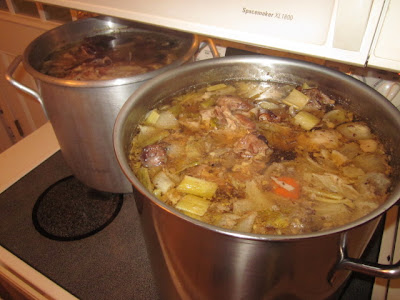 Being one who never likes to let anything go to waste, the next
day I put the remaining parts of the hog into two of my largest
stockpots and simmered them for 24 hours.  I would find out
the next day that the constant heat and moisture from the pots
fried the smartboard in my over-the-range microwave.  To
repair it, I found out, would be twice the amount it would cost
to replace it.  A new one is coming tomorrow.  No more 24
hour cooking. 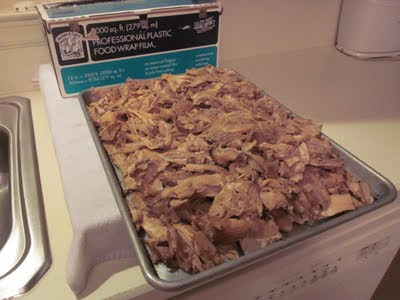 One of the products of killing the microwave was about 10
pounds of extremely tender pork, which I painstakingly removed
from the bones.  This I divided into five piles, vacuum sealed,
and put in the basement freezer for future pulled pork sandwiches. 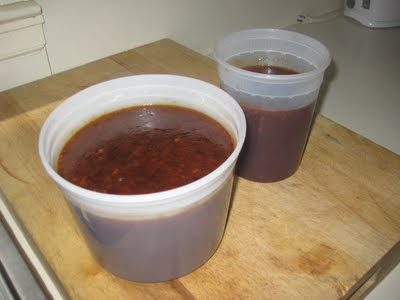 After straining the two pots, I had 5 gallons of beautiful stock,
which I boiled down to just under 3 quarts of rich, dark glace. 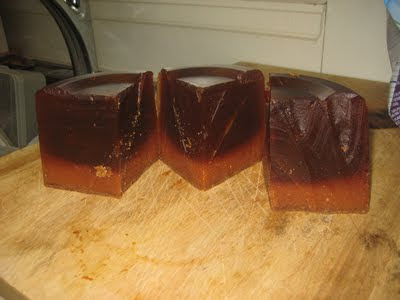 After cooling the glace, I cut it into sections to freeze.  This glace
has an incredibly high gelatin content due to the bones and
especially  the trotters.  This will be the base for sauce in the
future or a glaze for roasted potatoes or vegetables, or simply
re-constituted and used as broth for soup.   This pig went a
long way for us and we're grateful for its noble existence.
Posted by Baydog at 11:21 AM 3 comments: 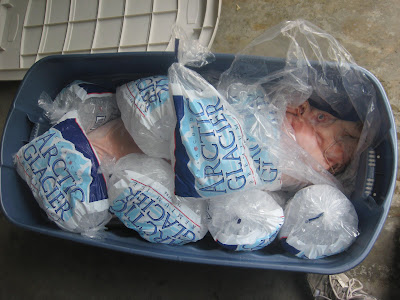 Patiently awaiting the charcoal spit-roaster, this 87 pound hog is
going to be the centerpiece of my daughter's High School
graduation party on Saturday.  Tomorrow, I'll inject an apple
cider brine and let it marinate overnight.  Saturday at 8:00 a.m.
it'll start slow-roasting and hopefully around 4:00 we'll have
crispy skin and juicy, fall-off-the-bone meat.  I call the cheeks!
Posted by Baydog at 11:18 AM 4 comments: 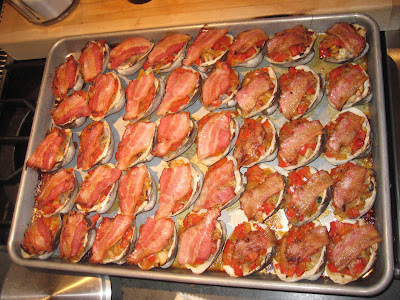 Dad used to shuck the clams, sprinkle chopped raw onions and
green peppers on each one, then place a square of bacon on top.
Simple.  Broil til done and the bacon curls up.  Then, several dashes
of tabasco later, scrape out the contents of the shell with your two
front teeth, chew and wash down with cold beer.
I usually find a way to make everything more complicated and
time-consuming.  I partially steam the clams with vermouth just
until I can get a clam knife inside the shell.  Saving the liquid in
the pot, I discard the top shells, free the clam from its adductor
muscle in the bottom half  and line the clams up on a sheet pan.
Saute diced yellow and red peppers, onions, and garlic with fresh
thyme and Old Bay seasoning.  Add some of the vermouth/clam juice
mixture and reduce.  When dry, set aside to cool.
Using a teaspoon, scoop the mixture onto each clam, turning the
spoon upside down and patting the mound firmly within the shell,
creating a domed shape.  Lay a square of  uncooked, room
temperature bacon on top of each, allowing it to conform to
the shape of the mound.  The clams are ready for a 400-450
degree oven until the bacon is rendered and crispy.  If you're
not heating them right away, throw them in the freezer for a
couple of hours.  When the bacon freezes in the dome shape,
it tends not to curl when cooked.  Tastes the same, but visually
they are alot more uniform looking, if you give a crap.
Cold beer is great with clams casino, but a Tanqueray 10
Gibson fits the bill nicely as well.  Is it five o'clock yet?
Posted by Baydog at 5:47 PM No comments: 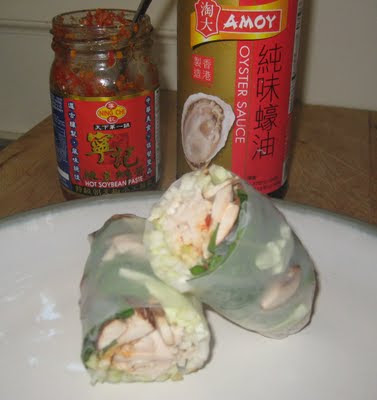 Rice spring roll wrappers﻿ make any leftovers fun
to eat and frankly, really cool looking.  It helps to
have some basic asian ingredients handy.  This roll
contained chicken, which I slow-roasted on the
Weber grill the other night, sliced crimini mushrooms,
shredded cabbage, and Thai basil leaves.  Then,
after a drizzle of oyster sauce and some chile paste,
I rolled her up tight.  It's a great, light alternative to
a sandwich, and the wrappers keep indefinitely
in the pantry until you're ready to roll.
Posted by Baydog at 11:58 PM No comments: